Why egalitarianism is not a slippery slope to endorsing homosexuality: Part 1

( I mention same-sex child molesting in one example in my “examples” point because a church that accepts their leaders doing it is obviously accepting same-sex acts, even criminal ones. This is not something all, or most, people with same-sex attraction do, nor does the article imply it.) 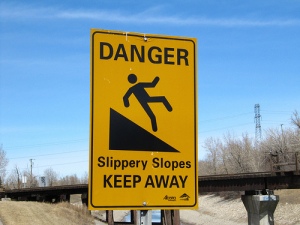 “Every figure, church and denomination that has publicly endorsed homosexuality — ‘gay Christianity’ — and transgenderism has without exception been egalitarian. This does not mean that every egalitarian endorses these sins, but it does mean that embracing egalitarianism puts you in tension…” – Owen Strachan

It is commonly asserted by complementarians that egalitarianism is a slippery slope to endorsing same-sex acts, transgenderism and the world views of the LGBT community, while complementarianism is a safeguard against it. I do not agree with them. Note that, for the sake of this article, I need to focus on people who endorse female subordination and accept same-sex activity/ LGBT community views, or who are egalitarian and does not. This does not say what your views should be, and except on transgender theory, not even what mine is. It asserts that the alleged tension is not there for an egalitarian who does not endorse ‘gay Christianity’ (Strachan’s word choice, Strachan’s quotation marks).

The two issues depend on:

Egalitarian/ complementarian debate focuses on the meanings of words like ezer (helper), kephale (head), and hupotasso (submit). The former two are used in the Bible to describe God himself. The gay debate focuses on terms like eunouchos (eunuch), arsenokoites (literally a combination of man + bed as a verb) and malakos (effeminate/ soft). None of these describe God in the Bible.

Two of the about 5 texts that (seems to) speak against gay acts are in the ritual law of the Old Testament, while none of the primary texts on female subordination are. The three New Testament texts used for discussing gay relationships are mostly about seriously sinful behavior and attitudes, and the issue is exactly what it is that those texts see as wrong. END_OF_DOCUMENT_TOKEN_TO_BE_REPLACED