God-on-the-back-seat religion: Wayne Grudem imply God is inferior to us

It’s not just Sarah Faith Schlissel who wants to give God the back seat.

>   Whenever someone helps someone else the person who is helping is occupying a subordinate or inferior position with regard to the person being helped.  – Wayne Grudem in Systematic Theology

>   Helping speaks to difference. The text says that God created her to be a “helper”–a role that involves aiding and supporting the leadership of her husband. God did not assign this role to the man. He assigned it only to the woman.  –Denny Burk, who also posts on the CBMW site, here.

As you probably know, and as Grudem and Burk certainly will know from their scholarship, the bible mostly uses the word helper (that same word used for Eve) for God. So we can superimpose this onto their explanations of helper, to see if they explain “helper” right:

>   Whenever God helps someone, God is occupying a subordinate or inferior position with regard to the person being helped.  – Wayne Grudem

>   Helping speaks to difference. The text says that God is our “helper” –a role that involves aiding and supporting our leadership. God did not assign this role to men. He assigned it only to Himself. – Denny Burk

Like Sarah Faith Schlissel, they practice God-on-the-back-seat religion. But there is  a major difference between Schlissel; and Burk & Grudem & Co. The poor girl was probably taught from a young age to think as she does, to not ask questions or study the bible for herself, but believe her father’s religion.  Grudem and Burk, on the other hand, are bible scholars. They will know that helper is mostly used for God. They either purposefully deceive their readers, or they honestly believes God is inferior to us/ aiding and supporting us as leaders over Him.

Either way, this statement, IMO, is a reason why Christians should not give CBMW views the time of day.  If the Council of Biblical Manhood and Womanhood aligns themselves with scholars who purposefully deceive, or who put themselves above God, we cannot trust their teaching.

The story of Eve? 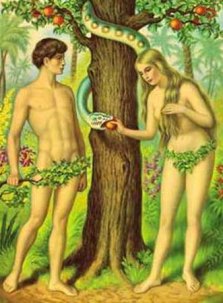 “See, Adam-woman?* You thought touching this will kill you! It does not. This is good.”

And the Adam-man stand beside the Adam-woman the whole time. He is not fooled. He knows the message was not “touch it and you will die.” He knows, unlike her, that touching it proves nothing. He does not try, from his superior knowledge, to stop her. Instead, he watches as she does wrong. She finds it good, and from the kindness of her heart offers what she finds good to him.

The female Adam shared what she found good. The male Adam did not share what he knew to be good – the understanding about the tree and its fruit.

The undeceived Adam-man eat, knowing full well that God really said they should not eat of it.

And God comes in and offer bad news: She made the mistake of turning from God, desire the serpent’s offer, and suffered harm from this, and this will happen again. She will turn from God, desire Adam, and suffer from the rulership Adam will usurp in his sinfulness.