Archive for the ‘The Rest of Scripture’ Category

Creation order meme: Who should listen to who?

This is a meme on the “creation order” argument. You are welcome to share this on social media if you want. END_OF_DOCUMENT_TOKEN_TO_BE_REPLACED

Dear Mrs. Noah, what have you thought

when your husband built a big ship on a message from God?

Did you think he was crazy, or strange or silly

to make an ark on dry land – for a big flood? Really?

Did God speak to you too, and tell you what He will do? END_OF_DOCUMENT_TOKEN_TO_BE_REPLACED

How (not) to preach about rape

“As a child, I my father told me that bees make honey from flowers, but spiders make poison from those same flowers. We can do the same with how we handle the Bible.”

It is a memory I buried for more than a quarter of a century. END_OF_DOCUMENT_TOKEN_TO_BE_REPLACED

Bible, Lightening the yoke, The Rest of Scripture

Does “the same things Jesus did and even greater things” contradict comp doctrine?

But here is the thing. Jesus, except for the hard part of dying to save us, which we could not do for ourselves, seems not to be so much into “roles” that is only for him or only for the church. Here are texts which make me believe he was not much into such “roles.”

2 Cor. 3:18 And we all, who with unveiled faces contemplate the Lord’s glory, are being transformed into his image with ever-increasing glory, which comes from the Lord, who is the Spirit. – NIV

Is serving only the role of Jesus, not the church? Of course not!

John 14:12 Very truly I tell you, whoever believes in me will do the works I have been doing, and they will do even greater things than these, because I am going to the Father. (NIV)

If SOREJAB is good Bible interpretation, women should do the same things their husbands do and even greater things. Which is, of course, not a gender role. If men and women should picture Jesus and the church (Biblical Manhood and Womanhood doctrine), John 14:12 would blow gender roles (the prime purpose of Biblical Manhood and Womanhood doctrine) out of the water.

Bible, Logic, The Rest of Scripture

Premise 2: Even complementarians admit that before God (in heaven), men and women END_OF_DOCUMENT_TOKEN_TO_BE_REPLACED

Logic, The Rest of Scripture

Equal, but women should rule!

You are all familiar with selective complementarian Bible reading. If, someday, you are in the mood for poking light fun at them, here are a few texts to use for construing a Bible presentation whereby women and men are equal, but men really should accept they are here to complement women as the ones with the wisdom to be teachers and authority figures:

Satan is male – Satan is described as “he” throughout the Bible.

God denies being male and connects maleness to dishonesty: Num 23:19

The words of a woman should carry more weight: The woman’s testimony taken as 100% true in all alleged rape cases where no member of the public would have heard them. Deut 22:25-26

Abraham, the father of the believers, was told to listen to his wife, in all she said: Gen 21:12

Women who proclaim God’s word are a mighty throng: Psalm 68:11 (Note: Some old translations leave out that these were women.)

Here is my main attempt of that nature. (The above texts were compiled after that attempt.)

humor, The Rest of Scripture

Was Jesus’ star pupil a woman? 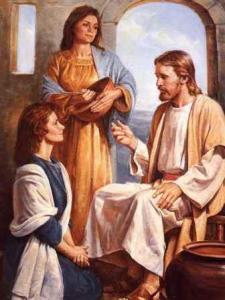 Samuel Martin has an interesting take on what it means that Paul sat at the feet of Gamaliel:

In his first Jerusalem trial (Acts 22:2), Paul introduced himself to the Sanhedrin as he who learned “at the feet of Gamaliel.” This phrase means more than we would take it for at first glance. It sounds like Paul is giving homage to his teacher, and that he hung on Gamaliel’s every word. Actually, Paul used this figure of speech to remind the Sanhedrin just how important a figure Saul of Tarsus was, even from his earliest years in Jerusalem. In the synagogues, students sat in an arrangement that reflected END_OF_DOCUMENT_TOKEN_TO_BE_REPLACED

The Rest of Scripture

Naomi and the three Jesuses

Naomi was bitter. She lost everything. She moved to a strange country with her husband, and now he and both her adult sons were dead. In a patriarchal world with no social security, where women trusted the men in their lives to provide, she had nothing. No husband, no sons. After a decade, she was on her way back. All she had was her also-widowed daughter-in-law, Ruth.

I don’t know how much or little Naomi felt that Ruth’s presence could have helped her: Ruth is from a different culture – where Naomi would still have some distant family in the new country, Ruth had nobody. On the other hand, young(ish) Ruth was a better candidate for a future marriage, and therefore a family that Naomi could be a part of. Naomi may have appreciated the company, but on the other hand, she may not. END_OF_DOCUMENT_TOKEN_TO_BE_REPLACED

Are the “sons of God” and “daughters of men” having giant children a story of tyranny and rape?

(Note: I am not teaching the contents of this blog entry. It is put out for evaluation. Correct me if I am wrong, learn from me only if I have some chance of being right.)

The men of power saw the women/ girls of the common people, and how beautiful they were. And they took and raped any women they wanted.

And God said: “My spirit shall not always be with man, he will only reach 120 now.” (Prior to that, people got a lot older.) “I cannot let any of the corrupt and powerful stay in power for too long.”

There were tyrants in the earth in those days and after that, when the men of power had children with the women/girls of the commonners, who also became mighty men who were honored, the men with authority.

And God saw that the people were very wicked (or perhaps that the wicked were powerful?) , and their imaginations and thoughts was only evil continually.

And God was sorry that he made humanity… (The story of all except Noah’s family being destroyed follows) – My paraphrase of Genesis 6:1-6

END_OF_DOCUMENT_TOKEN_TO_BE_REPLACED

Bronwen Speedie needed a cartoon for a Bible study she is planning, and I offered to make drawings for her words. END_OF_DOCUMENT_TOKEN_TO_BE_REPLACED

humor, The Rest of Scripture