How should an egalitarian church discuss sexuality with its youth?

When I was a teen, I loved Christian youth camps. But there was one thing that I did not care for: It seems most camps, had, on one particular day, The Lesson. That one where somebody who is not afraid of the topic tells us we are not supposed to get sexually active, and why this is harder for boys, and how girls should be careful how they dress …

I was luckier than some others, though. Some girls heard, for example, that if they are not virgins, they are like chewed gum which nobody else will want. Here, for example, is the testimony of Sarabeth Caplin:

I blamed myself every time he raped me. It was my fault, I thought… So I stopped wearing tight jeans, stopped trying to look cute before seeing him; it didn’t work. Taking my cues from abstinence groups like Silver Ring Thing and other popular books in the purity movement such as Every Woman’s Battle by Shannon Ethridge, I believed I was too “tainted” to leave him and start over with someone who respected me.

With some girls hearing they are worthless because of what happened to them, and with the messages which boys and girls get from society being very different, how should egalitarians approach sexual topics with teens? 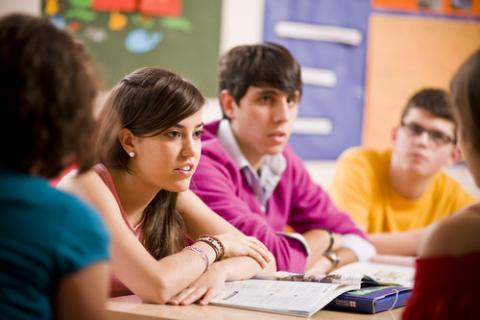 1. Boys and girls should end up in the same spot, but they get there from different directions

Both boys and girls should take responsibility for their choices, live a holy life before God, be mindful of their bodies, and respect the wishes and emotions of their partners. Superficially, this may sound like they need the same message. However, boys and girls come to your class with gendered influences, different for girls than for boys, from both the church and the world at large.

With these differences, boys and girls sometimes approach scriptural truth from different directions. There may even be times to teach them separately – but with the same end result in mind.

2. We need an integrated approach

Since sexuality relates to respect for your body, how to treat others, living a committed life before the Lord, relating to a merciful God, priorities, identity and self-image, etc., it is probably not wise to turn it into The Lesson, separate from every other lesson. Instead, it is probably more relevant to have applications on sexuality in lessons about other Christian topics:

> “Loving others as you love yourself” certainly implies caring about consent, and free, un-pressured consent at that. Is it possible to include sexual consent among your applications on this topic? What would someone who love others as himself think of the sort of acts in pornography?

> If your value is found in Christ (in a lesson about our identity in Christ), how does this relate to the girl finding her identity in being loved by a boyfriend? How does it relate to the boy who find his value in bragging about (often alleged) sexual conquests?

> If Jesus saves and forgives,(lessons with a gospel theme), what does this say of teens who made sexual mistakes?

Topics like putting God first, Jesus having mercy and forgiving, and making the right choices all have sexuality-related implications too.

3. We need an egalitarian approach

I already mentioned that the world and even – often – the church gives boys and girls different messages.

Sometimes, the message to girls is to be gentle and non-assertive. This does not make it easy for them to clearly refuse sexual advances. Boys, on the other hand, hear that “real men” should be assertive and in control of women. (The term “real men” is, of course, unrealistic and manipulative in itself: A man who does not meet imposed standards of masculinity is as real as any other man. But I digress.) It is easy to see how this combination could turn out very badly!

The Bible, on the other hand, calls women and men (and boys and girls) to be gentle. God never calls either sex to be in charge of the other sex. Scripture does not even tell a man to lead his own wife. Instead, Jesus said:

The New Testament also admonishes all believers to refrain from sexual immorality. Meanwhile, much of the world and even sexist church messages only blame and restrict women. (The Bible shows the male tendency to blame women in Genesis 3 already: “This woman – she gave me the fruit.)

Egalitarianism, in itself, already prepares teens for not pressuring partners for sex they do not want, for an assertive “no!”, and for taking responsibility for your body.

Egalitarian sexuality could be about “thou should”, rather than “thou should not”: Girl or boy, thou should live a life that pleases God. Boy or girl, thou should care about thy body – it is a great gift from God.

5. We need to discuss it in terms of being made in God’s image.

When I was younger, I thought the problem with pornography is that it shows sex between people who are not married to one another. I know better now: In pornography people – the image of God and the crown of creation, only a little less than the angels – are regarded as objects for use. I also think differently about lust nowadays: Lust is not, firstly, a desire to be sexually active. Lust is a desire to treat another image bearer of God as a mere object.
Teens should be taught to see the other sex as made in God’s image, and we should discuss how this affects the way we treat them, sexually and otherwise.

As egalitarians, we could teach, model, and even better, live integrated sexuality that is respectful, mutual, and allows both partners to be all God made them to be.

2 Photo borrowed from “Helping teens to listen” on TeachingEnglish.org.uk.

Do complementarians not understand themselves, or do they understand and lie to us?

If gender roles are good for women, do not tell us