Male headship before the fall: God’s message, or human perversion of Scripture? Part 1

According to Wayne Grudem, male headship has been part of God’s plan from creation.

In ‘Biblical Foundations for Manhood and Womanhood’, he claims that there are 10 reasons to believe in male headship before the fall. But are those reasons really there? Or, does he read them into the text because he wants to see it? Is leadership in the Bible blue, or is he wearing blue glasses which make it look that way? Over the next three blog entries, I will discuss his 10 reasons for believing in male leadership before the fall.

I will use blue and a quotation paragraph for Grudem’s words, and pink and a quotation paragraph for words which I wrote to show a different way of (mis)using the same Bible facts. The reason for quotation marks around the pink words is to show they are not my opinion – I use them to show that the same things Grudem uses to allege male lead, or similar things, could be used in a completely opposite manner too. Hierarchy is in the eye of the beholder, not the true meaning of the text.

Ten Reasons Showing Male Headship in Marriage Before the Fall

First God made non-living things like the sun and moon, then things that at least resemble God in the fact of being alive, like plants. Then fish and birds, which start to have some degree of consciousness, then higher animals, then man, then women, the crown of creation. Scripture itself shows that God often prefer younger siblings over older ones – Abel over Cain, Jacob over Esau, Joseph over Judah, David over his brothers.

Jesus Himself- the last Adam – is bigger than the first Adam. Scripture even testifies that the last shall be first. (Mat. 20:16) The fact that Eve was created after Adam has implications not just for Adam and Eve themselves, but for the relationships between men and women generally throughout time, including the church age.

Adam was made first, but that does not necessarily make him the leader. Plenty of Bible material turns first-last hierarchies on its head, These include many Old Testament stories in which the oldest brother is almost habitually not the one God chose, and the repeated message of Jesus that many of the last shall be first (Mat. 19:30; 20:16; Mark 9:35; 10:31; Luke. 13:30).

1 Tim 2:12-13’s message, in the context of the letter to Timothy, is:
“Do not worry about endless genealogies (1:4 – To permanently ban a certain group from teaching because the first member of the group was born after the first member of the other group is endlessly worrying about genealogies)… I, Paul, could be a preacher now (1:12) because I sinned while misled (1:13), and am not misled any more… I, Paul, do not currently allow a (particular?) woman to teach, or to dominate/ do violence against a (particular) man, because Adam was made first, and Eve was misled.”

In all probability, this woman did not know or understand God made Adam first, most likely because the gnostic cult she was from taught a woman existed first. And when she is no longer misled and find salvation, she can (like Paul, who was misled and is not misled any longer) teach truth she, at that stage, did not understand yet. Forbidding all women from teaching because Eve sinned while misled would be endless genealogies, and deny the power of Christ that sets free from sin.

…Adam, not Eve, had a special role in representing the human race… “For as in Adam all die, so also in Christ shall all be made alive” (1 Cor. 15:22)… This is further seen in the parallel between Adam and Christ where Paul views Christ as the “last Adam”. Adam had a leadership role in representing the entire human race, a leadership role that Eve did not have.

Reading the text with pink glasses

Eve sinned first, yet we die because of Adam’s sin. This shows that God did not regard the sin of Eve as seriously as that of Adam. Whereas Adam represents death (Rom 5:12-19; 1 Cor. 15:22a), Eve represents life (Gen 3:20). To follow male lead is to side with death, to follow female lead is to side with life. Christ needs to be a replacement Adam, not a replacement Eve. (God needs to replace the death-giver, not the life-giver.) This proves that God sees Adam as the bigger sinner.

In Adam, we all die, and Jesus replaced Adam. This does not make Adam a leader to follow, but a villain who did us as a species harm before any of us reading here was born. Nor does it make men, in general, leaders to follow. This, however, is not a reason to be suspicious of all men: In Adam, we die, not in Jack or José or Jonathan or Jim or Jurgen or Justin or whatever other man who ever lived.

For a longer discussion of this idea, see “Answering assumptions on the garden of Eden and gender hierarchy“. In the linked post, I discuss the fallacy of conflating Problem-causing (what Paul in the Bible accuse Adam of) and Should-and-could-solve-the-problem (arguably a position of authority) under the single term “Responsibility” (or “leadership role”, as Grudem calls it here).

When God made the first woman and “brought her to the man,” … he [gave] a name to her. .. In the context of Genesis… the person doing the “naming” of created things is always the person who has authority over those things.

Reading the text with pink glasses

When God made the first woman and “brought her to the man,” he [gave] a name to her. In the context of Gen. 16:13, where Hagar names God, the namer is the one who shows honor and appreciation to the one being named, and namers like (Hagar or Adam) see name-receivers (like God or Eve) as above them. .

You could give a name or nickname to someone above you. Or someone below you, or beside you. There is a misleading qualification in Grudem’s words, seemingly made for the sole reason he can make his point:

“the person doing the “naming” of created things is always the person who has authority over those things.” – Wayne Grudem (emphasis added).

Why this special qualification? Without it, Grudem’s point cannot be made. This is the one way he could exclude the example of naming (Hagar names God) that blows his theory completely out of the water. Naming is a sign of authority, he says – except when God is named. It would be at least as reasonable, if not more so, to assume that naming is *not* a sign of authority, otherwise a human would not be so presumptuous as to name God, and God would have been angry if a human did it.

Another example of naming in Genesis is Jacob naming a place Bethel (Gen 28:19). Bethel is a city already named Luz, where Jacob does not know anyone and has to sleep with his head on stones, where he has not shown any authority, where he moves on from and does not plan to have authority in future. This also shows that naming, even of a created thing, was not seen as having authority in Genesis. 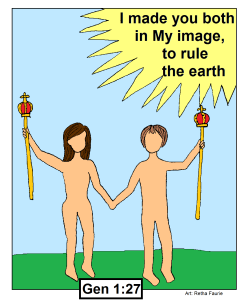 Man as Christ, woman as the church: Master post

Is the significance complementarians attach to men being here first compatible with creationism?