Are the “sons of God” and “daughters of men” having giant children a story of tyranny and rape?

(Note: I am not teaching the contents of this blog entry. It is put out for evaluation. Correct me if I am wrong, learn from me only if I have some chance of being right.)

The men of power saw the women/ girls of the common people, and how beautiful they were. And they took and raped any women they wanted.

And God said: “My spirit shall not always be with man, he will only reach 120 now.” (Prior to that, people got a lot older.) “I cannot let any of the corrupt and powerful stay in power for too long.”

There were tyrants in the earth in those days and after that, when the men of power had children with the women/girls of the commonners, who also became mighty men who were honored, the men with authority.

And God saw that the people were very wicked (or perhaps that the wicked were powerful?) , and their imaginations and thoughts was only evil continually.

And God was sorry that he made humanity… (The story of all except Noah’s family being destroyed follows) – My paraphrase of Genesis 6:1-6

It seems to me that the above, by simply looking at the Strong’s Hebrew dictionary, could be the meaning of the much- 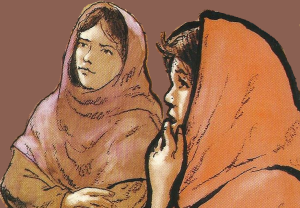 Why would I translate “the sons of God/ gods” with “men of power”?

Strong’s Hebrew and Greek dictionaries tell us that “sons” means, in the broadest sense of the word, literally and figuratively, among others nation, quality, condition.

God/ gods come from a plural word (gods rather than god) in Hebrew. It also sometimes meant magistrates or judges, or the mighty, according to Strong’s.

Could “the sons of the gods” then be those who were among/ affiliated with the men of power? Even literal sons of those with power (nepotism at work)? Or were the sons of gods perhaps affiliated to the gods the people believed in, priests of the gods?
For the “daughters of men”, the entry for “men” in Strong’s gives the meaning firstly of humans, but also “the common sort”, men “of low degree”. Perhaps this could refer to the women/ girls among the common people.

Some theologians think that “sons of God” denotes despots1, and they were getting into polygamous marriages with the daughters of the commoners.

Could the Bible mention that these males “took any that they wanted”, because that is part of what makes this a story about wicked men? They took who they wanted, regardless of what the women wanted? Is this the wickedness which God wanted to eradicate with a flood?

And giants? Strong’s say that word can properly be translated as a bully or a tyrant. (It is derived from the verb “fall” in a way that means “feller”, one who cause another to fall.) Tyrants do not ask consent when they take what they want.

It sketches a picture of the violent ruling the earth, and the particular wickedness that is mentioned is raping women. After that, the Noah story starts: This is why God wanted to destroy the earth with a flood.

It has parallels with the Sodom and Gomorrah story, where a story of men apparently wanting to rape  (Genesis 19) is also told right before the destruction, in Sodom’s case by a fire.

Does this show that God, right from the beginning – in societies which were not influenced by anything like modern feminism – hated tyranny in general, and forcing another person sexually in particular? Rape is the sin, I believe, which God used as the reason when He destroyed. If so, it is understandable that the real meaning of this story would become obscured to mostly male Bible commentators for centuries.

1See the Despot interpretation as the second one here. For other possible interpretations of the passage, note al 3 ideas on the same page. The page favours the idea that it was angels sleeping with humans, but there are several reasons why I disagree.
The idea that this passage is about despots is something I learned from other writers, but to connect it with rape, and the rape scene in Genesis 19, is my insight.

Naomi and the three Jesuses

Comments on: "Are the “sons of God” and “daughters of men” having giant children a story of tyranny and rape?" (3)