I have said before that I have asked women, home schooling mothers who believe in men as “priests” and authority figures, what should be done if an authority figure molests your children. These patriarchy supporters were completely unwilling to say that children should be kept away from such molesters. They were so hung up not going against authority that they would seemingly rather allow a molester to continue than to risk speaking out – in an imperfect way – against one.

If you want proper evidence of patriarchy’s teachings on abuse and authority, Recovering Grace has a new article with a lot of diagrams and teachings, scanned straight from books of Gothard’s Advanced Training Institute, to prove that “patriarchy” really makes it impossible for the abused to get away in an approved manner.

Gothard, of course, had to recently step down because of sexual harrassment accusations himself. Imagine how many layers of authority figures a girl would have had to go through to “rightly” complain about him (without appealing to authorities too much or too little, as in the diagram from his material on the right of this page).

Jesus replied, “And you experts in the law, woe to you, because you load people down with burdens they can hardly carry, and you yourselves will not lift one finger to help them. – Luke 11:46 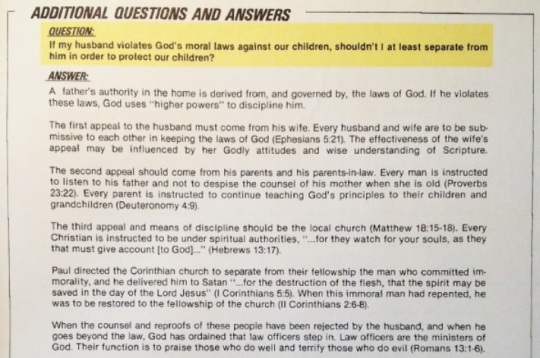 Gothard lessons: When children are molested by the father, the molestation needs to be discovered at least 4 times, after the first time with the mother appealing to him to stop, then his parents or in-laws, then the church. Only if he is discovered to be molesting again after all these appeals, could he be given over to the law…

Christian culture does not understand intimate partner abuse – what can we do about it?

Do feminists really neglect their children?

Comments on: "THAT question evidence: Link to Gothard material" (4)