Why some egalitarians seem to disrespect stay at home mothers

Long ago and far away, there was someone who liked seeing colors like red, brown, and orange around him. He disliked seeing too much blue, green, and turquoise. He convinced people that the Maker God also likes reddish colors better than blueish ones. Preferring blue is a sign of wickedness.

Many people believed him. Soon, few people would even admit it if their favorite color is blue. Everyone said they like brown and red better than blue or green. Everyone, except for a few rebels who truly did not care about society’s norms, wore red and orange and brown.

That, of course, was evidence for the rumor: Blue and green shades are not meant for respectable people. Only the wicked wear such scandalous hues. Deep down, some people liked hues that remind them of sky, sea, and growing plants, but they never admitted it. How could they? If people knew they liked these colors, their reputation would take a beating.

Those who were born with brown eyes and hair had it made. Those with green or blue eyes struggled to get hired, married, or even a fair trail when accused of crime.

As the legalism worsened, people chose not to have lawns (green) or look at pictures with a lot of sea or sky (blue). They preferred moving to rainy places where skies are grey more often than blue. 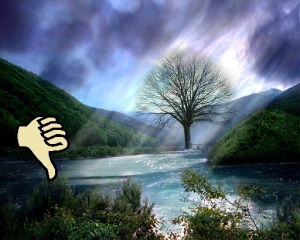 Then someone named Freeda came and explained that the Maker God never asked everyone to wear reddish colors. He does not prefer hues on the red end of the spectrum to hues on the blue side. Freeda said that the colorism of the society was dishonoring God, and focusing on the wrong things.

Those brunettes with brown-eyed brown-haired spouses and children, who always heard they were the most godly, got defensive: How dare Freeda invalidate their choices? Wearing what they did, and marrying who they did, have always been a source of pride for them! They love living in red, brown and orange! Freeda is disrespectful towards their values!

Freeda never disrespected red wearers. She thinks as highly of red wearers as she thinks of blue wearers. But red wearers expected more, and Freeda refused to call their choices better than the opposite.

That is more or less, I think, why egalitarians are accused of disrespecting housewives: We respect them as much as we respect anyone else. But we do not call their choice the only right one for a woman, or even necessarily a superior option. It is one option among many, good if done the right way and for the right reasons, bad if done wrong and for the wrong reasons. We honor the wise, loving Christian housewife as much as the wise, loving Christian who is not a housewife.

But then, these accusers are probably not the only ones who dislike egalitarianism because equality is not enough for them.

How often does the Bible say men should be the heads of their households?

Could a form of federal headship be part of an egalitarian world view?

Comments on: "Why some egalitarians seem to disrespect stay at home mothers" (4)