Smoke and mirrors: A review of the Danvers statement (Part 2)

(Keep on reading, and you will see how this photo of Pope John Paul ties in with complementarian gender roles. It does.) 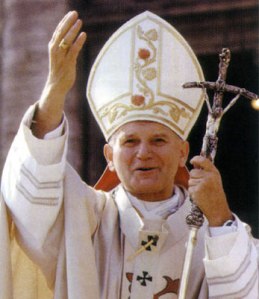 The same question I asked at the start of the review is still the one I want to ask in the affirmations: Is this a good reason for Biblical manhood and womanhood? What gender roles does it give that Christian men should be and do but not women, or vice versa?

Note, dear reader, that this set of posts won’t try to convince you in any way on wifely submission to her husband, or a man’s headship of his wife. Marital submission and headship is about how a married husband and wife should treat each other. It says nothing of how the married man or woman should treat the 7 billion people they are not married to, or even just their own children. Marital headship or submission says nothing whatsoever of the activities or demeanor of the unmarried or widowed. Biblical Manhood and Womanhood, on the other hand, claim that all men – married or unmarried – should play a role that does not belong to women, and all women – married or unmarried – have a role men do not. The “Biblical Manhood and Womanhood” crowd claim these differences are part of Christianity.

Likewise, I will not discuss here if women could preach or be elders. Even if they cannot, the majority of men who call themselves Christians do not want to be preachers or elders either. BMaW say that even those men and women who do not want to lead in church (men cannot all be leaders in church, and most are not) have different roles God expects of them – a manhood role if male, and a womanhood role if female.

We have been moved in our purpose by … the increasing prevalence and acceptance of hermeneutical oddities devised to reinterpret apparently plain meanings of Biblical texts; the consequent threat to Biblical authority as the clarity of Scripture is jeopardized and the accessibility of its meaning to ordinary people is withdrawn into the restricted realm of technical ingenuity;

Personally, I don’t think everything in the Bible could be taken on face value – some things contradict each other that way. But the Danvers Statement’s makers are measured by their own measure here. (Matt 7:2)

Based on our understanding of Biblical teachings, we affirm the following:

That both Adam and Eve were created in God’s image, and equal before God as persons, is included in both the creed of Christians for Biblical Equality and in The Danvers Statement. It does not touch on gender roles and people on both sides of the debate could affirm it.

Smoke: Distinct in their manhood and womanhood? Yes, everyone knows we are biologically distinct. Gen 1:26-27 gives no specific distinction beyond calling them male and female, so reading one into it will be eisegesis.

Does Gen 2:18 give a gender role? Only by the fallacy of composition: Assuming that what is true of Eve is true of all women. This text calls the first woman a helper of the first man. But it never says that all women should be helpers of all men/ all wives of their husbands/ all people who are younger of all who are older/ all people since the one created second of all people before them. It never alleges men should not be helpers of their wives too. It does not spell out that helping is a gender role.

If the Danvers Statement is against “hermeneutical oddities devised to reinterpret apparently plain meanings of Biblical texts“; if they believe “the clarity of Scripture” should not be “jeopardized”, they will accept that Genesis 2:18 is a statement about the first woman, not a general statement about all women but not men. Thus, it cannot create a gender role.

See a longer discussion of the Genesis 2 texts here – no masculine and feminine roles are ordained by God in Genesis 2, unless you read things into the text which are not there.

I am uncomfortable to discuss a part of 1 Cor 11:2-16 under a “plain meanings of Biblical texts/ accessibility of its meaning to ordinary people” frame of reference, because 1 Cor 11:2-16 seemingly contradicts:

We should be careful what we take from this passage. Obviously, not all of its apparently plain messages are true.

What gender roles are ordained (definition of ordain: To order by virtue of superior authority; decree or enact; to prearrange unalterably; predestine) in vs. 7-9?

> A man should not cover his head (when praying or prophesying).

That could be regarded, by literalists, as an unalterable role God ordained for men.

> A man is the image and glory of God:

A woman is also the image of God and also have His glory. (See texts in the paragraph on why I am uncomfortable about taking this passage at face value.) Having the image and glory of God is not a gender role.

> The woman is the glory of the man and created for him.

Could we read any other gender role into “created for the man?” Well, we certainly cannot read a direction of authority into it. The earthly incarnation of Jesus existed for mankind – which does not make us His authorities. All in all, the only application given for “the woman is the glory of man, created for man” is that she should have authority on her (apparently literal, body part above the neck) head. If we refrain from hermeneutical oddities and stay with the plain meaning, we will not think up other androcentric (male-centered) applications.

In short, only one set of gender roles – assigned male tasks and female tasks – can be defended from taking this passage literally. It is a male role of not wearing a hat/ veil when praying and prophesying in :7, and a female role of wearing one (or perhaps deciding for herself, while the man has no choice) from the surrounding texts.

1Ti 2:12 But I suffer not a woman to teach, nor to usurp authority over the man, but to be in silence. 13 For Adam was first formed, then Eve. 14 And Adam was not deceived, but the woman being deceived was in the transgression.

> By taking it on face value, we get that either teaching in general, or teaching the adult man in particular, could be a task only for males.

> Adam being formed first and Eve being deceived is a statement about two ancestors, not a gender role.

And none of these texts say the roles (1. head covering or perhaps having a free choice on the matter, versus not allowed to cover; 2. teaching as a male task) should find an echo in every human heart. If it found an echo in every human heart, even the person who never heard of Jesus would know that a wife teaching her husband something she learned, like perhaps where you can buy eggs at a low price, does wrong. Believers and unbelievers alike would immediately feel discomfort when seeing a photo of the Pope with his hat – doesn’t he know that males should not wear anything on their heads when praying or talking about God?

[To be continued in part 3]

Smoke and mirrors: A review of the Danvers statement (Part 1: The Rationale)

Comments on: "Smoke and mirrors: A review of the Danvers statement (Part 2)" (3)