Male headship – is the very gospel at stake?

Daddy answers to God for all of us. Believe it or not, it doesn’t make me feel less of a person when my four-year-old goes around saying, ”God’s the boss of Daddy and Daddy’s the boss of Mommy.” ” – Pearl Barrett in “Why not submit”, Above Rubies magazine 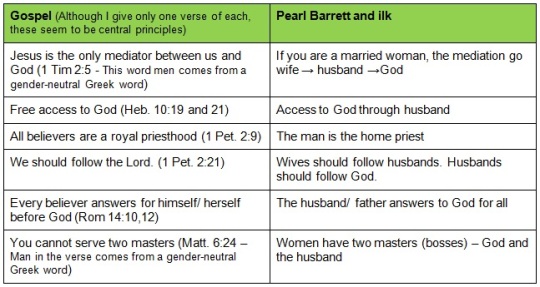 Now, if you know the gospel, you will know that Pearl Barrett’s interpretation cannot be true. These texts has to be understood some other way.

You regulars here already know that the Greek word kephale, translated to English as head, has several meanings: The literal head on your neck; origin; beginning; capstone; source; provider; prominent part. Some Greek scholars say leader is among those meanings, some say it is not. When a word has several meanings, the sentences around it determine which meaning is in view.

This point was already discussed.

That would mean that the Christian wife should listen to her husband’s authority above all, the way the church has to listen to Christ as supreme authority. But she should also put Christ’s authority first, as she is part of the church. Who should she put first?

Reason #3: God is probably not the authority figure of every man.

(I may misunderstand this point and this may be a bad argument. If so, correct me, please.)

Every man would include:

*The male convict who is in jail for rape and murder

* The man who is a witch doctor in an African village

My main reason for rejecting that head mean authority figure in these texts? I cannot proclaim Christ-plus-someone-else as the way, the truth and the life.

If you conclusively prove to me that kephale certainly mean “leader” here, then I may dump Ephesians and Corinthians, because I will conclude it opposes the gospel of Jesus. But I will not throw away Jesus. However, I think the head-as-leader people misunderstand Paul. I do not think we should dump Paul’s writings as anti-Christian.

So, I choose to simply accept Paul never said husbands should lead wives.

Why some complementarians/ patriarchists should not home school